WHY I DON’T SAY AMEN WHEN I PRAY 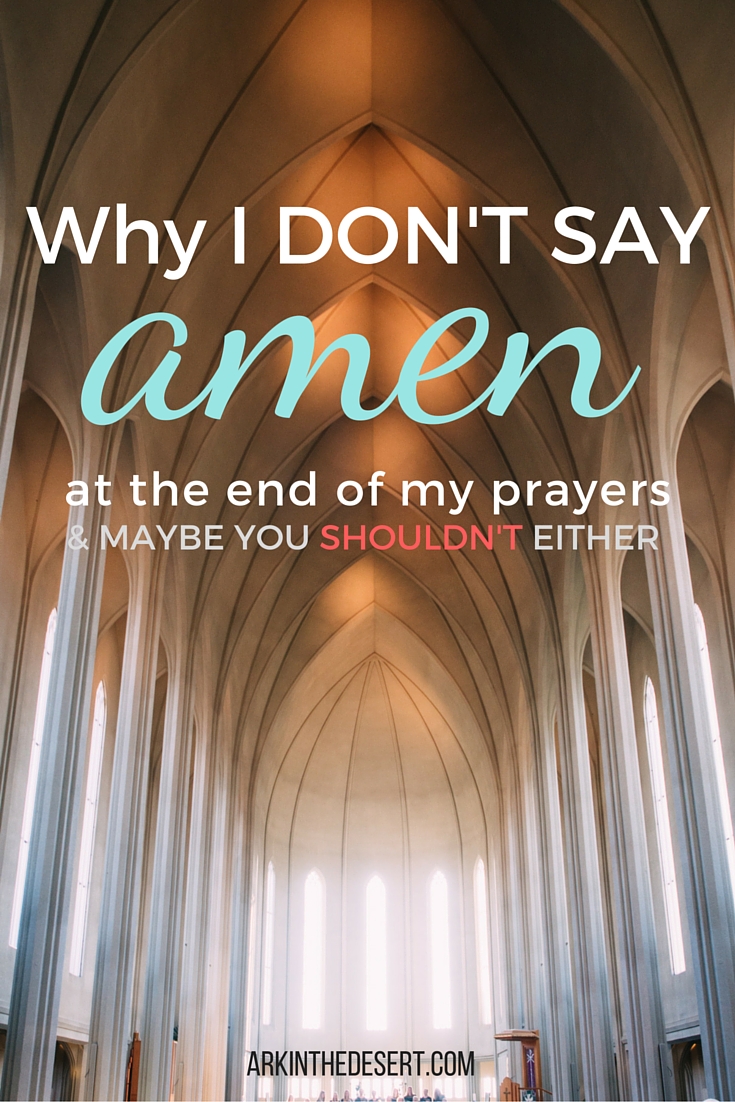 I guess you could say I’m a rebel.

I’m NOT about going through the motions or doing something because everyone else is. Meaning and purpose are important to me and drive nearly all of my decisions (probably because for so long they didn’t).

I’m a creature of thought.

My rebellious heart was most evident during our engagement. At the age of twenty I was rebelling against the stream of society. Wedding planning was hard because I questioned nearly all of the ‘traditional’ aspects of weddings. Etiquette became a person I quarreled with.

I rebelled against the system, cutting out unnecessary components to simplify and personalize. We did not partake in all of the usual wedding traditions ‘just because’ everyone did them.

It helps that I married a rebel too.

Truth is we are ALL rebellious, every single one of us. Not just as Americans—though our history is bursting with rebellious people from our founded independence, to the civil war, civil rights and even into today—but as humans.

Since the beginning of our existence we’ve rebelled. Sure Adam and Eve had some precious harmonious moments in Eden with one another and God but an act of rebellion set that whole thing ablaze and here we are.

You see we’ve been created, creatures of a Creator, which means we didn’t establish things. We are not in charge. We have no hold over the Earth, no control—not really. Yet we think we do. We live in indifference to God with no acknowledgement of His power, His creation. We worship the created instead of the creator and in doing so are in direct rebellion against Him.

He is our authority since He is the author of our life, but we ignore Him, living against His command. Largely as a society we can see this, the direct assault against the King. The revolt is being posted on Facebook, tweeted about and aired on the news.

The rebellion is obvious in our mainstream culture but subtle in the Church. It’s still present though we choose to ignore it, hide it as if it can be hidden.

It sneaks in disguising itself as worship when in reality it’s just obligatory singing with some emotions, or bible study which is nothing more than mundane memorization or knowledge building sessions.

Our rebellious hearts seep into Church itself, which becomes a Sunday morning ritual and even prayer, which becomes habitual, void of interaction, one-way communication and rehearsed.

Our rebellion as the Church is most often played out in religious affairs. Tradition becomes void of any meaning and people gather together out of habit. They sing out of custom and pray just because they always have. People just go through the motions with little thought to the purpose or meaning.

Life becomes hollow as the ‘core’ of our existence is built on nothing more than customs and practices.

THAT’S THE THING WITH TRADITION, AN INHERITED PRACTICE IS NOT HTE SAME THING AS BELIEF, AS KNOWING IN YOUR HEART. Jesus is after the heart not the motions.

Jesus also addressed this issue of a rebellious religious heart in the Pharisees. Seeing that they were action orientated but without true belief he said this, “You have a fine way of rejecting the commandment of God in order to establish your tradition!” Mark 7:9

If we merely focus on what we do, then we will forever remain hollow and habitual creatures always in rebellion against God.

This is why I DON’T say Amen—at least in my personal prayers. Amen for me has become hollow, as a means to close my prayer, something I always do and have always done.

Amen means so much more than just a signal to close prayers though, the word means “LET IT BE SO.”

In saying Amen I should be saying “God if it is your will let it be so,” mirroring the way Jesus taught us to pray.

Our Father who is in Heaven hollowed be thy name. Thy Kingdom come, Thy will be done, on Earth as it is in Heaven.

A prayer so often mundanely spoken (in my experience) uses the same language as Amen. Father, thy will be done, let it be so, Amen.

It should be a public proclamation of my heart centered on Christ. In saying Amen I should be laying down my rebellious nature and accepting God’s plan, welcoming his sovereignty.

But because of my rebellious heart the word has become watered down in my prayer life—it has lost its meaning to me. Recognizing this word void of meaning I now say “let it be so Lord, if it is your will.”

I’ve replaced every Amen with this proclamation so that my heart might be centered on him instead of my motions, for if my heart is there my actions will be also. Maybe you too need to drop the Amen and pick up the meaning. Something to consider.

So Lord, help us to see our rebellion before you so we might understand the great love displayed on the cross towards us. Help us to seek your heart in all things instead of just going through the motions. Spirit set our hearts ablaze for the glory of you creating in us a deep longing. Let it be so Lord, if it is your will.